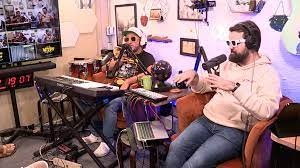 On October 28, the hosts of a local podcast show in Santee finished a 25-hour marathon in their garage studio.

Both of the hosts claimed to have experienced the illness firsthand.

In an effort to raise $2,500 for Alzheimer’s research, John Albright and Ryan Tafolla went live on “What the Podcast?”

It was a significant event for both of our families because “my grandma currently suffers from dementia with Alzheimer’s and John’s grandma recently passed away from Alzheimer’s,” Tafolla added.

Albright remarked, “It’s fantastic to see that they’re also empowering the caregiver, which is essential to us as well.

The non-profit group Alzheimer’s San Diego will get all of the funds raised. Albright and Tafolla claim that the charity serves both those with Alzheimer’s disease and those who care for them.

When they learned that they were able to not only meet but also quadruple their objective, Albright and Tafolla said they were pleasantly delighted.

Unexpectedly, a donor gave and matched our current fundraising target, bringing the total to $5,000 straight now, according to Albright.

They claimed that doing so gave them the motivation to continue. “We would like $10,000. It’s a complete pipe dream, but Tafolla noted that with visibility comes opportunities.

Share
Facebook
Twitter
Pinterest
WhatsApp
Print
Linkedin
ReddIt
Email
Telegram
Flip
Copy URL
Previous article
Over a dozen catalytic converters were stolen from the U-Haul company overnight
Next article
A gunshot occurs after a “possible money disagreement” in Dimondale, according to the MSP