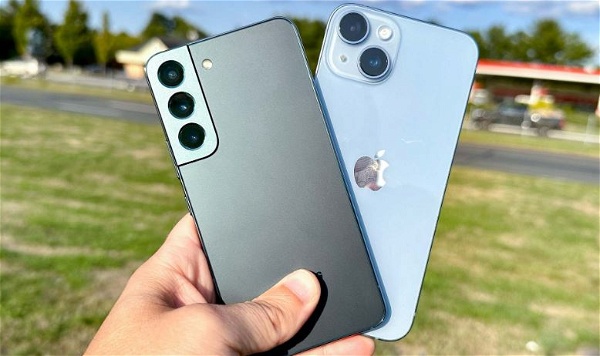 As has been established several times (in previous stories), I do not believe that it is inherently wrong or bad when a phone manufacturer takes some cues from another company when creating its software or hardware. On the contrary, I’m all for it, as long as those changes are helpful to users and add something to their experience rather than detract from it.

After Samsung made curved screens “cool” and popular, dozens of other Android phone makers got on the same train wagon – as we’ve come to realize, curved screens were just a novelty that quickly went out of style – even Samsung’s flagship phones like the Galaxy S22 and Galaxy S22 Ultra are now slowly stepping away from this trend.

For example, we’ve seen a lot of “copycat” stories in the industry that didn’t turn out to be particularly successful:

Back in 2018, Xiaomi made the big mistake of copying Apple’s iPhone X design almost 1:1 (with the notch and rear camera layout), when eventually every phone tech media outlet called out the Chinese tech giant, quickly leading to a significant shift in Xiaomi’s approach to hardware (think: Xiaomi Mi 9, Xiaomi Mi 10 Ultra, etc.).

But there are what I call “good influences” or “good steals,” and that’s what we seem to have with Samsung’s brand new One UI 5 software on top of Android 13, which Galaxy S22 users and future Galaxy S23 owners are getting now, or very soon!

Surprisingly, we don’t have to dig deep to find the positive influences of iPhone 14 and iOS 16 that Samsung has taken in putting together One UI 5 for the Galaxy S22 and Galaxy S23 – it’s all on the lock screen!

The most notable influence of iOS 16 on the lock screen of One UI 5 is the ability to choose and customize Wallpaper and Clock styles. It’s not that the option to select a new wallpaper and customize widgets from your lock screen is so new – what reminds me of iOS 16 are Samsung’s design choices. The Wallpaper and Clock drop-down menus now closely resemble iOS 16 and iPhone 14 in terms of function and design – fonts and colors.

Samsung being Samsung. However, you also have more options for customization even than those available on Google’s version of Android 13 or iOS 16, which is a brilliant touch. For example, you can choose whether notifications on the lock screen are displayed in a detailed preview or just as icons; you can also adjust the transparency level of those notification popups, automatically invert the text color, and so on. You can also resize lock screen widgets like a clock, something you can’t do on the Pixel 7 or iPhone 14 series. Samsung even lets you choose the bottom-left and bottom-right icons on your lock screen (although this feature has been available for a while).

The new Wallpaper style customization on Galaxy has an iPhone twist to it Another aspect of One UI 5 heavily inspired by iOS and iPhone is the style for customizing wallpapers in your Galaxy’s background settings.

For starters, you can see how Samsung categorizes the backgrounds in One UI 5 into “Featured,” “Gallery,” and “Graphics.” The layout is also very iOS-like, with previews of backgrounds, thumbnails, and scroll carousels. Interestingly, it is Apple’s wallpaper picker that offers more options here, with the ability to Photo Shuffle, create new wallpapers from emojis, use the Weather app as wallpaper, or even dynamic Astronomy wallpapers with options to see the Earth, the Earth in detail, the Moon and Moon in particular, as well as the solar system.

With One UI 5 on the Galaxy S22, you can now stack widgets just like on the iPhone; Smart suggestions is like Siri suggestions on the iPhone Unlike One UI 4, which gave you limited options for stacking widgets like iOS 15 and iOS 16, One UI 5 now gives you more freedom regarding which apps you can use to create stacked widgets (you can now develop stacks by using different apps).

In case you don’t know, Samsung’s “stacks” are widgets you can swipe through instead of cluster your home pages with multiple devices that take up much more space. Think of widget stacks as the Swiss army knife of widgets! The Galaxy S22’s One UI 5 also offers an intelligent suggestions widget that includes multiple apps – the ones you use the most, so you can open them instantly. If that sounds familiar, it’s because iOS 16 already offers practically the same thing, what Apple calls Siri Suggestions / App Suggestions (not sure why we need two names for it, Apple?).