After asking a homeless man if he wanted a finance job, Rishi Sunak faced criticism 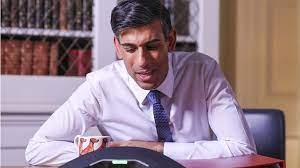 After enquiring about his interest in money from a homeless man, Rishi Sunak received criticism. Prior to the Christmas holiday, the Prime Minister visited a The Passage-run homeless shelter in London on Friday and served hot meals to residents. However, the Prime Minister is caught on camera asking a homeless guy if he works in business during a “excruciating” encounter.

In response, Mr. Sunak stated, “That is precisely what I am trying to achieve,” and Dean then said that fixing the economy would be beneficial to business.

When the individual questioned the prime minister if he was “sorting the economy out,” the awkward conversation with Dean started.

When Mr. Sunak followed up with the question, “Do you have… do you work in business?” the man responded, “No, I’m homeless. In reality, I’m a homeless person. But I have a business interest.

The man responded, “Yeah I wouldn’t mind, umm.. but, I don’t know, I’d like to get through Christmas first,” when Mr. Sunak asked Dean if he wanted to work in finance.

“I enjoy finance,” Dean said, “it’s excellent for the city, and when finance and whatnot are doing well, don’t we all do well in London?”

Dean told Mr. Sunak that he was hoping a charity would help him get some temporary housing so he would not be sleeping on the streets for Christmas.

“Watching this, I am concerned that the Prime Minister thinks being homeless means “doesn’t have a country pile at the moment,” said Labour MP Stella Creasy. How much more out of touch could this Prime Minister be, asked Lisa Nandy, the shadow levelling up secretary?

“Homelessness is on the rise this winter as a result of the Tories’ economic collapse, which drove up mortgage and rent costs. So instead of posing for painful photo ops, perhaps Rishi Sunak should concentrate on solving this situation. “The last Labour government came very close to ending rough sleeping; the next one will complete the task and put a stop to it forever.”

“Out of the loop. He was over his head. When he was not in office. Time for a General Election, said Bill Esterson, a fellow Labour MP. However, Phil Hackemann, a journalist for the German publication Axel Springer SE, defended Mr. Sunak and stated it’s “not true” that the Prime Minister was acting inappropriately.

He noticed, “The individual expressly states that he is interested in financial services.” And I actually think that’s extremely empathetic and courteous that Rishi speaks with him about that at eye level rather than presuming he doesn’t know anything about it just because he’s homeless.

He acknowledged that the public sector wage issue was “tough,” but he claimed that his government’s policies were “fair.” In accepting all of the recommendations from the independent public sector pay review organisations, the government has acted fairly and sensibly, according to Mr. Sunak.