Builder of the New York and London Financial Centers, Albert Reichmann Death at 93 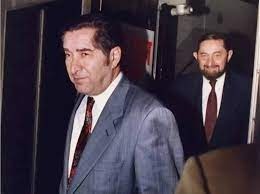 The well-known Toronto developer and philanthropist Albert Reichmann has passed away. He was 93.

According to Robert Reichmann, Albert’s grandson, “Faith was the entire identity of both (his brother) Paul and Albert and the entire family.”

While Albert’s family claims that philanthropy and his Orthodox Jewish faith were important aspects of his life, the family, which is among the wealthiest in Canada, is most known for its property development empire, which included Toronto’s First Canadian Place and Canary Wharf in London, U.K.

Robert lauded his grandfather for his efforts to assist Jews living in the USSR, but Albert, along with his brothers Paul and Ralph, created Olympia & York, which eventually became one of the largest development companies in the world.

Traveling behind the Iron Curtain didn’t cause Albert “very much fear.” According to Robert, “He felt like he was driven by his conviction of trying to help people and doing what he can do.”

Robert remarked, “He was committed to the old Soviet Union and genuinely aiding Soviet Jewry at a time when you weren’t even permitted to be Jewish. His Jewish background played a major role in all he did.

He was “extremely, very proud of his orthodoxy,” which is why he always wore his yarmulke publicly.

Albert, who passed away on Saturday, was one of five brothers who were born to an Orthodox Jewish family on January 18, 1929, in Vienna, Austria. From Vienna, Canada was reached by a tortuous journey. According to the Vancouver Sun, the family had relocated from Hungary to Vienna in 1928, when the patriarch of the Reichmann family, Samuel, started a successful egg-selling enterprise.

The Reichmann children were all young when the family fled to Paris in 1938, the year before the Second World War began, before making their way to Tangier, Morocco. Stephen Gross, Albert’s son-in-law, remarked that “they were always one city ahead of the Nazis scurrying away.”

Samuel started a business dealing in foreign currencies in Tangier, while Renee Reichmann, Albert’s mother, worked to aid Jews who had been abandoned in Europe. According to Maclean’s magazine, “soon the Reichmann youngsters were spending hours packaging food, including chocolate rations, for the prisoners of infamous concentration camps in Europe.”

The extended Reichmann family lost several members during the Holocaust. Paul Reichmann, who passed away in 2013, claimed to Maclean’s magazine that Samuel transferred his family’s funds into London-based bank accounts prior to their escape because he was worried about the rise of the Nazis. Samuel then used those funds to buy gold, which helped to finance the family’s escape.

“The Reichmanns’ Tangier residence swiftly became into a hub for further Jewish immigrants escaping the Holocaust. According to Maclean’s, Renee Reichmann “supplied food, gave counsel, and cared for the sick. Albert immigrated to Canada in 1959, when he began establishing a real estate empire alongside brothers Ralph and Paul. Egosah Reichmann, a Romanian native who was married to Albert, was born in Sântă Măria. In Israel, the two were married. On April 6, 2022, Egosah went away.