- Advertisment -
HomeNewsBusinessA campaign financing probe may result in the suspension of an ex-Florida...
BusinessFinance 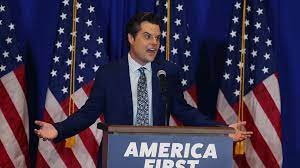 According to a report made public on Tuesday, a court looking into a campaign finance controversy involving former state lawmaker and Miami Beach commissioner Michael Grieco has recommended a 90-day suspension of Grieco’s law licence.

The Florida Supreme Court is being urged to find Grieco guilty of breaking the state’s rules for attorneys regarding conduct involving dishonesty or a “criminal act that reflects adversely” on the attorney. The report was issued by Miami-Dade Circuit Court Judge George Sarduy as part of a Florida Bar case.

The ultimate decision about whether and how Grieco should be punished will now be made by the state Supreme Court. In addition to the suggested suspension, Grieco is also required to cover the Florida Bar’s undetermined costs of the proceedings, according to Sarduy’s report.

Grieco, a well-known criminal defence lawyer in South Florida who is said to be thinking about running for mayor of Miami Beach later this year, was unavailable for comment as of Tuesday night. Grieco “respects the recommendation of the Referee,” according to a statement from his attorney in the Florida Bar matter, Ben Kuehne.

The Florida Supreme Court will be in charge of deciding how to resolve these old claims, Kuehne said. Since then, Michael Grieco has persisted in standing up for his clients’ rights and advancing the interests of the neighbourhood.

Kuehne continued, “Voters in Miami Beach have been aware of this issue and have chosen and returned [Grieco] to the Florida Legislature.”

Grieco, 47, left his position as a Miami Beach commissioner in 2017 due to the issue involving campaign financing. In 2018, he was chosen to serve as a Democratic state lawmaker, and two years later, he was not challenged. In 2021, he filed to challenge incumbent Ileana Garcia for the state Senate seat, but he withdrew last summer.

Jennifer Krell Davis, a representative for the Florida Bar, declined to comment on the situation. In July 2017, The Bar formally complained about Grieco.

The issue concerns Grieco’s actions during an unsuccessful 2017 run for mayor of Miami Beach. In that year, Grieco entered a no contest plea to a misdemeanour charge that he had secretly collected $25,000 in foreign funds through a straw donor for a political group he was running.

The Miami-Dade Commission on Ethics and Public Trust discovered in 2021 that Grieco had misrepresented his affiliation with the People for Better Leaders committee, first by telling the Miami Herald he had nothing to do with it and then again by telling the Herald: “It is entirely wrong. You have unfettered access to my soul.

Grieco made statements “designed to mislead the press and public on his genuine involvement” with the PAC, according to Sarduy, the referee in the Florida Bar case.

The 64-page referee’s report, which is dated September 30, 2022, was made available to the public on Tuesday.

Grieco first claimed, via his counsel, that he was representing the PAC, but later testified under oath in the referee’s investigation that he was not doing so.

Accordingly, it is evident that the respondent’s evidence and narrative on this subject vary depending on the audience and the objectives they are intended to serve, according to Sarduy.

In these hearings, under oath before me, Grieco “committed misrepresentations regarding his engagement” with the committee, Sarduy continued.

Grieco “provided the referee with a comprehensive and accurate summary of the facts,” according to Kuehne.

Grieco’s issues started during his 2017 mayoral campaign. He portrayed himself as a straight shooter who would take on special interests in City Hall while running for office. However, a Herald investigation revealed that he was covertly running a PAC and receiving funding from some of these special interests, including developers, lobbyists, and city suppliers. Grieco reportedly urged committee donors for their support.

In response to questions from the Herald, Grieco categorically denied any involvement.

Grieco declared, “I do not have a [political committee].” “I did not set one up. I haven’t asked anyone for one.

Both the Miami-Dade ethics commission and the referee deemed that denial to be false, as well as others of a similar nature.

Sarduy mentioned Grieco’s prior public rebuke by the Florida Supreme Court for his actions as an assistant state attorney in 2008 when he made his recommendation for punishment. Grieco was accused by the Bar of interfering with a friend’s assault case by giving the impression that he was participating in it and then requesting special treatment for his friend.