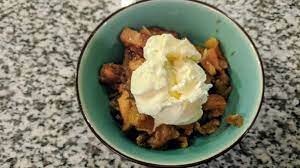 Or select a dessert flight, which often consists of four different cobblers or banana puddings.

The Peach Cobbler Factory’s proprietor says she started her new business because she thinks Gaston County people need a location for a variety of desserts and that she believes in sweets.

Owner Sparkle Agnew describes her establishment near the busy intersection of Franklin Boulevard and Cox Road, behind Walgreens, as “the loveliest place.” We provide sweets in a range of temperatures, from cold to scorching. We also provide five different varieties of cinnamon rolls and cookies.

People prefer desserts that are unavailable at restaurants, she claimed.

Ronnie and Rise Allen of Cherryville, South Carolina, were travelling to Myrtle Beach when they had the notion of hiring two cobblers to go.

Ronnie Allen, who had learned of the company from the couple’s daughter and is aware of her parents’ love of cobblers, remarked that “it’s definitely different.”

Carrie Robbins, a Door Dash driver, claims she frequently picks up food for her clients at the establishment and notes that many of them are regulars. When she admitted to Agnew that she had never tried the dish for herself, Agnew offered her a serving of strawberry banana pudding.

Agnew has worked in Mecklenburg County for the past 17 years in a range of positions, including social services, the sheriff’s office, and child support. Even though her only prior work experience in the culinary sector was as a server at Applebee’s while a student at the University of Georgia, she claimed she quit in July and opened The Peach Cobbler Factory after Thanksgiving.

“I took a leap of faith. My father, who passed away in October 2021, always encouraged me to pursue my aspirations, said Agnew. “To do what I enjoy doing, which is assisting people,” was his dream for me.

Every customer who entered Agnew’s shop was greeted. She aims to create a welcoming environment for families where guests leave happy than when they arrived.

I love helping people, she added, whether it’s by making them smile or, in this line of work, by serving them the nicest dessert ever. “It makes me pleased when my clients depart with a smile on their face.”

Agnew began offering products when asked what a customer who had never ordered from her before may like to order: sweet potato pecan cobbler, red velvet banana pudding, blackberry peach cobbler, and cherry swirl banana pudding.

Finally, she remarked, “They’re all good.” “For that reason, many passengers choose the dessert flights. They are unable to choose, therefore they want to try everything.

An ice cream scoop of vanilla is included with every cobbler. Cold brew coffee, milk, and “peachy tea” are also offered by the shop.