Child tax credits and inflation are caused by materialism 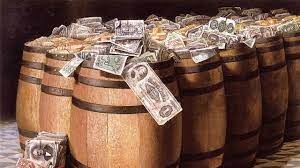 Recently, Democrats in Congress have advocated for more national debt in order to give more money to families with children. Representatives feel they can buy loyalty by sending checks, even if the receivers don’t need it. This is an example of Congress at its most materialistic.

Voters ought to expect more from government decision-makers. The essential necessities of order, justice, and liberty are what the people need most from the government, not money. Additionally, the federal government is failing to do its fundamental tasks.

The campaign to expand child tax credits is straightforward. Politicians strive to achieve popular outcomes. Some are inspired by an ideology that believes that in order to earn votes, officials must make sure that favoured groups receive additional funding. Often, as long as the money goes to a significant constituency, they don’t care if the people need it or not.

Sen. So-and-So voted in favour of a measure that awarded you money, goes the reasoning. Make sure you are aware of the people who supported you when it comes time for reelection.

It turns out that families with children make up a significant political constituency. Families are very important to Americans, and many programmes exist that go beyond poverty relief.

It’s a sizable section. Republicans and Democrats will both be present in the 29.5 percent of American households with children. Election results may change if you can persuade people to vote a certain way.

The politics may be interesting, but the policy is terrible. Large transfers of funds to those who might not need them shouldn’t be supported by voters. The child tax credit is determined by two factors: whether a person has children and their income. It is not based on financial need. Income restrictions are lenient and don’t start to decrease until married couples make over $400,000. There are also no asset restrictions. Therefore, wealthy couples who retired in style at age 30 are just as eligible as low-income single mothers.

There is no benefit. Increasing debt levels to pay off those who don’t deserve it fuels inflation and puts a heavier load on the coming generation. If politicians truly care about children and families, they wouldn’t want to burden them with debt.

Nevertheless, politicians are frequently ignorant to the issues because of the possible rewards of appeasing a significant base. As former House Speaker Nancy Pelosi (D-Calif.) put it, they look at something like the child tax credit and claim that it will “provide more relief for families.” Voters should instantly inquire if those who are doing well will also receive relief.

There is a great deal of chaos caused by the rise in inflation. One of the obligations of the federal government is to maintain a stable currency. When Congress is pursuing too few resources, it should stop spending money, but the federal government did the exact opposite. Additional stimulus legislation passed by Congress increases the nation’s debt and fuels inflation.

But politicians don’t seem to care about the fundamentals. They are unable to claim credit the way they may when individuals collect checks. But individuals should give the fundamentals some thought. They ought to care that the government runs smoothly. Additionally, if politicians cared a little more, perhaps they would be more interested in carrying out their duties than in giving money to those who don’t need it.