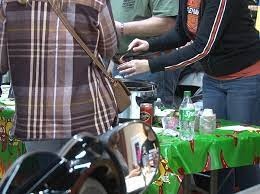 There were a total of 22 distinct chilies, and competitors had to give judges a list of their ingredients. Each batch of chilli had to be homemade and equal five quarts in size. At 12:30 a.m., the cook-off judges started sampling the various chillis and casting their votes. The public voting started at 1 p.m. The cost for trying the chillies was $10 per person. The youngsters of the NGO B.A.C.A. will get 100% of the monies raised on Sunday.

The line of those waiting to pay to enter to sample the food was long enough to reach the entrance shortly after 1 o’clock. Additionally, a DJ played live music and raffle prizes that were given out.

Diesel, the president of the NCWV branch, and one of the judges spoke on the significance of these occasions for their group. Due to the fact that we are a non-profit organisation, he claimed, “it benefits us. With the money we get from the public, we are able to carry out our entire purpose and care for abused children.

The goal of B.A.C.A. is to give mistreated children a safer environment. As a group of bikers, they exist to give kids the confidence they need to face the world they live in. They are prepared to help their injured buddies by connecting them with a reputable and cohesive group.

There aren’t any future events or fundraisers for B.A.C.A. at the moment, but you can get updates here. The nonprofit organisation has its monthly meetings at Triple S Harley-Davidson if you’re interested in joining. For more information, call 304-554-9420 as well.