The Entrepreneur Establishing A Global Presence In The Branded Toy Industry 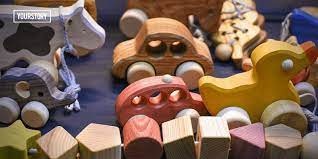 You are probably aware of the mutually beneficial relationship between the entertainment business and the toy manufacturing sector if you have children or if your memory spans as far back as your own childhood.

Choose any well-known children’s or young adults-oriented film, TV show, or game, and chances are the branded toys will be sold in shops all over the world.

It’s a rich market for global toy giants like Lego, Hasbro, and Mattel, and it’s good news for those who make entertainment. Although estimates vary, Grandview Research estimates that the global toy market will reach $291 billion in 2021 and $308 billion the following year. Branded toys play a significant role in the entire sum.

These numbers pique the interest of both investors and businesspeople. Nothing is more alluring than a sizable market, after all. But there is still another issue to think about. Is there any potential for the market for branded toys to be disrupted? Is there opportunity for business owners to take the initiative, act differently, and eventually find their niche?

Toikido, a two-year-old British business that produces toys for businesses in the entertainment sector, is led by Darren Garnham. It is currently being sold through 70,000 or more points of sale in 100 different markets throughout the globe.

When I spoke with Garnham, I was curious to find out more about the challenges he faced as a fledgling company seeking to work with entertainment firms to develop his two-dimensional assets into three-dimensional ones while competing with well-established toy manufacturers. The products’ introduction was also discussed.

As acknowledged by Garnham, it is much simpler to enter the market for branded toys if you already have experience in the field. “Before founding the business, I worked in toys, retail, and entertainment. I oversaw the brand team at Universal Studios,” he claims.

So why leave a prominent position that can also pay well?

Well, the epidemic was the impetus, as is the case with many contemporary entrepreneurial tales. This was partially due to the fact that Garnham started to reassess his priorities and consider if he really desired a career that forced him to travel frequently and be away from his home and loved ones. But there was yet another sensible explanation.

“Large businesses reorganised their workforces and implemented furlough plans as a response to the crisis. A squad could have been put together at a great time, he argues.

All well and good, but how does a young company start to enter a seasoned market? Gurnham says his aim was to offer something different to potential partners.

According to him, it typically takes 18 months to bring a toy concept from design to retail outlet. It is maybe not unexpected that you must juggle given the quantity of balls. Owners of the intellectual property, the studios, must organise their own advertising campaigns. Additionally, toy contracts must be negotiated, and design and manufacturing timelines must be considered.

According to Garnum, “We set out to streamline that procedure.” And Toikido is managed similarly to an IT firm.

As a result, many internal processes have been accelerated, meeting time has been reduced, and decisions have been made more quickly. However, it ignores the opposite side of the equation. In order to cut the time to market by 6–8 months, IP owners will also need to move more quickly. maybe more quickly than usual. Is that the issue?

According to Gurnham, entertainment corporations itself want more speed. He mentions a Netflix project based on the television programme Back to the Outback. He explains, “We were the only one who could deliver in four months, so that’s why they picked us.

All of this seems lofty for a company with a small staff. Relationships with three manufacturing partners and a network of distributors have been essential to getting things done. Again, having experience in the industry aided Garnham and his team in developing those connections. Sales totaled £60 million last year, generating a £4 million profit.

The toy market is enormous, but it is also unnoticed—at least in terms of entrepreneurial activity. But it appears that there are chances to launch successful firms quickly. Having said that, having experience in the industry probably doesn’t hurt for makers of branded toys.