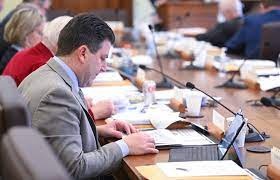 Harold Ward, secretary of the state’s Department of Environmental Protection, claims that a $10 million pilot initiative to aid local governments in the state’s demolition efforts has succeeded in attracting lawmakers’ attention.

When Ward spoke before the House Finance Committee late last week, queries about the programme were the most often asked ones.

Ward informed delegates that the initiative needed at least ten times more funding than the $10 million it received in its first year. He claimed that the DEP received 103 responses to a survey it sent out to city and town officials.

Just within DEP, we’ve already determined that there are structures worth more than $100 million that require assistance, according to Ward. “This is a $500 million issue in the state of West Virginia if not more.”

According to Ward, one of the pilot program’s objectives was to make politicians aware of the problem.

The purpose of this effort, according to Ward, “was to do exactly what it has done, which is to pique your attention and enable you to understand its necessity and significance to the state of West Virginia.” That was a component of our plan.

Delegate Larry Rowe, D-Kanawha, predicted that the DEP will require funding for operating expenses to carry out the programme. The DEP should provide knowledge to smaller areas that have never participated in a demolition programme, according to Rowe.

J.B. McCuskey, the state auditor, has advocated for the state to pay for the cleaning through the DEP’s REAP programme. He informed the members of the Finance Committee on Friday that there are effective ways to grow the programme.

In order to lower the individual cost of each demolition and to allow our local governments more influence over what happens to it afterwards, McCuskey stated, “it is our type of aim to have a statewide programme where we are bidding this out with significant pieces of money.”

The region along Pennsylvania Avenue between downtown and the Bellview neighbourhood is one of the clearest instances, according to Fairmont authorities, of how blight clearance is improving the city.

Residents may follow development on an interactive map at the city website, according to Shae Strait, director of planning and development for Fairmont. As the future changes, Strait added, “we’re starting to see indicators that the eradication of blight has been crucial in sustaining a number of neighbourhoods and their success in the future.”

The city may purchase properties that have been condemned and are awaiting demolition in order to hasten the process, in accordance with Fairmont’s authorised Home Rule Plan.

“We aim to demolish another 25 to 50 structures this calendar year as well,” Strait added. “We have demolished probably a little over 50 buildings during the last two years.”

According to Strait, the city of Fairmont funds the procedure as much as possible internally and manages each property separately. Council members must agree to all property purchase negotiations and any required follow-up action. Council members adopted ordinances for four properties on Bellview Avenue, State Street, and two more on Walnut Street in the latter half of 2021.

The properties were re-added to the tax rolls and the city made around $10,000 during that sale.

According to Strait, “City Council has been giving cash straight from the general fund for nearly seven years now, therefore the majority of Fairmont’s work has not been grant financed.

According to the West Virginia Legal Education to Address Abandoned and Neglected Properties, Fairmont had 300 abandoned or decaying structures as of 2015. Strait claims that as of this now, only roughly 100 people still exist.

The amount of building permits for new single-family homes or even townhomes is expected to rise this year, according to Strait. “We’ve seen a number of private land owners and contractors come in to purchase some of these properties,” he said.

In the heart of Fairmont, there is a business called Loving West Virginia, which is another example of a success story. The Morgantown-based company is leveraging sweat equity to bring a local small business to the community while preventing a downtown building from degenerating into blight.

As a result, Strait noted, “we can see a mix there, with some owners hesitant to cooperate, while others are quite receptive and will even give us permission, if they don’t have the resources to do so, to intervene, step in, and get these blighted structures destroyed.”