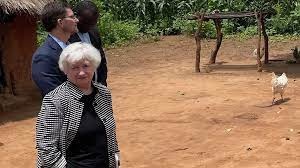 According to US Treasury Secretary Janet Yellen, South Africa and the US will establish a task group to “follow the money” in the illegal wildlife trade.

Yellen made the news while on a visit to the nation, which is abundant in wildlife but has been particularly hard struck by rhino poaching.

As she toured a game reserve north of Pretoria, Yellen declared, “We must ‘follow the money’ in the same way we do with other significant crimes’ if we are to prevent further poaching of wildlife populations and stop the related illicit trade.

The earnings from the illegal wildlife trade must be located and seized, among other things.

In order to better serve law enforcement agencies in the two nations, the task force will contribute to improving information exchange between financial intelligence units.

The demand from Asia, where rhino horns are allegedly utilised for curative purposes in traditional medicine, however, makes it a hotspot for rhino poaching.

Over the past 15 years, the rhino population in Kruger National Park has drastically decreased.

Elephants, pangolins, and abalones have all been the victims of poaching.

On the third leg of a continental tour to forge a new “mutually advantageous” economic strategy with Africa, where nations are being actively courted by Russia and China, Yellen arrived in South Africa.

Her journey to the most developed country in Africa followed the Russian Foreign Minister Sergei Lavrov’s tour, who was in Pretoria earlier this week.