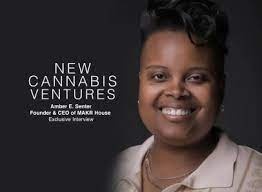 Amber Senter has always been passionate about marijuana. In 2013, her experience in branding and marketing first brought her to the cannabis industry. For a sales and marketing role with a tiny sweets firm, she relocated from Chicago to Oakland.

Senter now works in the cannabis industry and promotes social fairness. She is also the Co-Founder, Board Chair, and Executive Director of Supernova Women, a nonprofit organisation dedicated to uplifting people of colour in the cannabis business. She founded and serves as CEO of MAKR House, a California cannabis house of brands. She sat down with New Cannabis Ventures to discuss her viewpoint as a cannabis industry leader in California as well as the progress that has been made and the work still to be done in the area of social equity.

Cannabis products are produced and sold by MAKR House to authorised shops in California. The business also offers coffee. Under the Landrace Origins brand, it sells cannabis-infused pre-rolls in addition to coffee and cannabis-infused items. Products from the company are sold in dispensaries in the Bay Area, and starting in January, they will also be available in southern California.

Although it has been difficult for the company to get money in the current environment, private equity investments have been attracted. According to Senter, it has discovered people who support the organisations and the team.

The illegal market is still present in California. Senter claims that because of the state’s rules, there is a high barrier to entry and no reason for unregulated operators to participate in the legal market. Although she acknowledges that taxes would continue to be a major obstacle, she believes that easing rules would increase the motivation to operate in the legal sector.

In 2015, Supernova Women was established. The first social equity programme in the nation was developed by the 501(c)(3) nonprofit in collaboration with the city of Oakland. In order to build its social equality programme after that, it collaborated with San Francisco. When developing those initiatives, the organisation put a strong emphasis on giving the community a voice. Senter and her group spent a lot of time interacting with residents of the cities and communicating with city staff members. On SB 1294, the state’s first social equality law, Supernova Women collaborated with California State Senator Steven Bradford in 2018. Due to this legislation, the social equality programme that now supports programmes across the state was created.

Social Equity Development Senter claims that Oakland currently has the best effective social equity programme in the nation. Because the programme evaluated its results and changed course to enhance them, in her opinion, it has been effective. The programme initially demanded that all general applicants establish a social equity operator. That strategy did not turn out to be effective. Cannabis cooperatives, which enable social equity operators to split expenses including rent, insurance, utilities, and security, are now available through the programme. These co-ops are currently limited to manufacturing, but there are plans to include more types of businesses in this model.

According to Senter, other municipalities around the nation could benefit from using this concept. For those attempting to launch their own firms, the costs and shared space lessen the entry hurdle. Senter and her coworkers are still engaged in social equity work. In California, they are currently campaigning for the establishment of a state-level definition of social fairness. Senter claims that while most other states with social equity statutes have a consensus definition, California does not.

Although social equity requires continual work, the cannabis industry’s understanding of how people of colour have been disproportionately impacted by the war on drugs is a significant step forward. Senter believes that the two most important factors in ensuring the success of social equality programmes are money and accountability. She believes that when federal legalisation inevitably occurs, social equity operators will have access to government grant and credit programmes.

showcasing the talent in the cannabis industry In order to make cannabis more egalitarian and to create space for small businesses, Senter mentioned some of the talent working behind the scenes. She emphasised Nina Parks, a board member of Supernova Women who has contributed significantly to San Francisco. Senter claims that she organises events and was the first to incorporate cannabis into a city street festival.