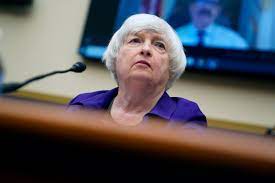 Treasury Secretary Janet Yellen warned a House panel Wednesday that Russia`s aggression in Eastern Europe will have “enormous economic repercussions in Ukraine and beyond.” She added that the rising price of energy, metal, wheat and corn that Russia and Ukraine produce ”is going to escalate inflationary pressures as well.” Russia’s invasion “including the atrocities committed against innocent Ukrainians in Bucha, are reprehensible, represent an unacceptable affront to the rules-based global order, and will have enormous economic repercussions for the world,” she told the House Financial Services Committee.

“The sanctions we’ve placed on Russia are pushing up the price of energy. It’s a price that’s important to pay to punish Russia for what it’s doing in Ukraine,” she added, drawing on how the conflict is impacting Americans at home. A measure of inflation closely monitored by the Federal Reserve rose 6.4% year-on-year in February, its biggest year-on-year rise since January 1982, and inflation hit a 40-year high. The U.S. and its Western allies imposed a ton of sanctions on Russia in the early weeks of the war, and government officials recently closed loopholes Russia could try to use to circumvent them.

Her remarks were part of her annual testimony on the state of the international financial system. Along with touching on the need for food and energy security and debt sustainability globally, Yellen called on Congress to provide support to the International Monetary Fund and World Bank organizations, which have provided grants and humanitarian funds financing to the world’s poorest and most vulnerable. “Globally,” she said, “spillovers from the crisis are heightening economic vulnerabilities in many countries that are already facing higher debt burdens and limited policy options as they recover from COVID-19.”

On Wednesday morning, the United States announced further sanctions, this time against the two adult daughters of Russian President Vladimir Putin, in retaliation for “war crimes” in Ukraine. Increased penalties for banks. “The Treasury Department is determined to hold Russia accountable for its actions so that it cannot benefit from the international financial system,” Yellen said. Lawmakers also questioned Yellen about the threat of an invasion of Taiwan as China and the United States and its allies continue to impose sanctions on Russia.

She said the US is ready to impose sanctions on China if Beijing moves aggressively against Taiwan. she said. “I don’t think we should doubt our ability to do the same in other situations.The Indonesian government has defied calls to exclude Russia by announcing that it will hold the G-20 summit impartially. “I have made it clear to my Indonesian colleagues that I will not be attending some of the meetings of the annual summit in which Russia participates,” Yellen said.