Dale Moss opens up about his relationship with Clare Crawley.

The Bachelorette alumnus, 32, opened up about rumors he cheated on Clare and provided an update on their relationship in an episode of the Hollywood Raw Podcast.

The couple got engaged in season 16 of The Bachelorette before going their separate ways in January. A month later, they reunited, which led fans to believe they had reconciled.

In the interview, Dale shed some light on the current state of his relationship.

Click inside to see if they are still engaged … 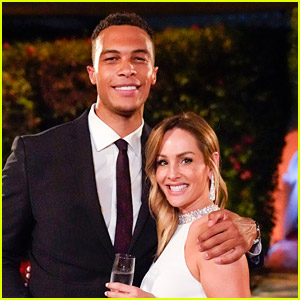 The former footballer has revealed that the allegations of cheating were not factored into his brief break up with Clare.

“It was never a conversation, even when we went through our separation. It wasn’t even a thing. It was never even a topic of conversation, ”Dale said of the cheating rumors. “You have to really look beyond that and focus on each other. I mean, it sucks. When things are going for your character and you are completely against it, those are the hardest things to deal with.

He also added that he and Clare were in a good position, despite all the rumors.

“We never hid during all this time that we were around. We definitely take time and spend time together, ”Dale explained. “Clare and I are in a good position. When the time comes, we’ll definitely be talking about all of these things. At the moment, we are just focused on each other. We keep things private and it works for us. In time, we’ll talk about it together.

However, that doesn’t necessarily mean the couple are engaged. “I’ll say this, Clare and I are in a good position. Focus on each other and leave it there, ”he added.

Dale and Clare were spotted in New York City a week ago, suggesting they’ve gotten back together.

Over 25 lakh MT procured in Punjab

LiveEO establishes a strategic partnership with Planet, setting the preconditions for rapid expansion

Sunwing returns to the Region of Waterloo this winter with