Vanessa Bryant is speaking in response to a tweet Evan Rachel Wood wrote about her late husband Kobe Bryant, just hours after his tragic death in a helicopter crash last year.

The Westworld actress sparked tons of outrage for her tweets in January 2020, but Vanessa is seeing them for the first time now and decided to respond.

“What happened is tragic. I am heartbroken for the Kobe family. He was a sports hero. He was also a rapist. And all of these truths can exist simultaneously, ”Evan wrote in a tweet.

For those who don’t know, Kobe was charged with sexual assault in 2003, but the charges were dropped after his accuser refused to testify. A civil case was then filed and a settlement was reached, although Kobe is presumed innocent in the eyes of the law.

She said: “Is your insensitive, libelous and slanderous fake tweet on 01/26/20 vile and disturbing to say the least? Behavior like this is part of the reason innocent black men go to jail for crimes they didn’t commit. An accusation does not make someone guilty. YOU DON’T KNOW THE FACTS OF THE MATTER. “ 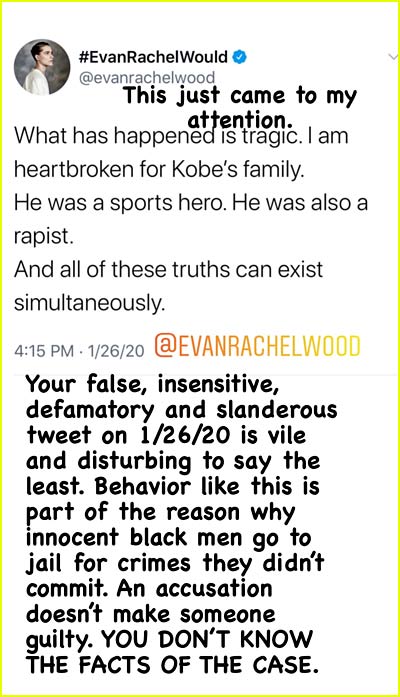 Evan has been in the news over the past few weeks after accusing her ex-fiancé Marilyn Manson of having “horribly” abused her for years.

How Kentucky convinced Kiyaunta Goodwin to become a wildcat

IFFCO seting up oxygen plant in Guj, to give it for free to hospitals