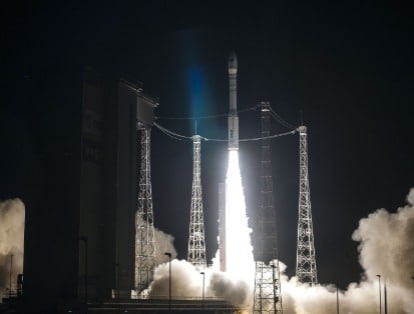 On November 29, the European Commission gave Arianespace the mandate to launch five Copernicus Earth observation spacecraft on Vega-C rockets between 2024 and 2026.

Arianespace CEO Stéphane Israël said at a press conference that the deal secures his launch vehicle provider’s position as a major institutional customer for the European Commission, which operates both the Copernicus and Galileo navigation constellations.

“The contract we signed today with Copernicus is a sign of our deep relationship with the European Commission,” he said, calling it the company’s best customer.

The deal includes the launch of Sentinel-1D, a synthetic aperture radar mission, in late 2024. Sentinel-2C, a high-resolution land imaging satellite in mid-2024. Sentinel-3C, an optical radar and altimeter satellite scheduled for launch in 2024 or 2025. Sentinel CO2M-A and CO2M-B are two of his satellites to study carbon emissions that will be launched separately in 2025-2026. They will join Sentinel-1C, and Arianespace received a contract in April to launch on Vega C in 2023.

It is unlikely that the European Commission, whose leadership emphasizes the importance of autonomous European access to space, would have chosen a different launcher. However, the increased payload capacity of the Vega C announced in July made this vehicle an option.

Israel declined to specify the value of the contract, but claimed that the value was “very competitive” with American launchers. It’s very competitive compared to what we saw when it was introduced from.

Israel said his four satellites, including Sentinel-1C, may not have been launched on the original Vega. “Vega C allows you to expand the Copernicus constellation.”

His two of the satellites, Sentinel-2C and -3C, are small enough to accommodate secondary payload launches, said Marino Fragnito, senior vice president of Arianespace and head of his unit of Vega business. says. The company envisions the inclusion of additional satellites in these launches as part of its launch contract, and an “agency passenger” is planned for the Sentinel-2C launch.

The deal with Copernicus increases Vega-C’s backlog to his 13 launches, plus his two launches of the original Vega. Fragnito said one of the two Vega launches is for the European Space Agency’s biomass satellite, and the other is tentatively scheduled for the launch of the Italian Space Agency’s PLATiNO imaging satellite. Vega C was scheduled to have its first commercial launch in November. It launched two Pleiades Neo imaging satellites for Airbus on the 24th, but Arianespace delayed the launch due to an unspecified technical problem with the rocket. This launch was postponed to his December 20th and Ariane 5’s launch to his December 13th he was postponed by a day.

Fragnito said the problem was in the payload fairing disconnect system’s pyrotechnics and could not be repaired with pads. “We had to bring the top composite back to the integration facility, open the fairing, replace the equipment, close it, and put it back on the launch pad,” he said. “It will take several weeks.” Israel thanked CNES, the French space agency that operates the Kourou launch site, for he shortened the interval between launches to seven days so that they could be launched consecutively.

In addition to the Copernicus launches, Arianespace has scheduled five Galileo launches. These include two of his that were originally scheduled for launch on the Soyuz, but became unavailable after Russia’s invasion of Ukraine. Negotiations are underway on how to handle these launches, he said. Israel said it will finalize a framework agreement with the European Commission on the launch of the next-generation Galileo satellites once the Soyuz launch contract issue is resolved. “First we have to solve the force majeure problem, which is not easy.”

He also expects Arianespace to play a role in the Commission’s secure his connectivity constellation. This has recently been called Infrastructure for Satellite Resilience, Interconnectivity and Security, or IRIS². “The Ariane 6 is perfect for deploying the IRIS² constellation, which could be complemented by the Vega C,” he said. “Nothing has been decided yet and it will be the choice of the European Commission.”