In spite of rising prices, the Dutch king announces billions in aid 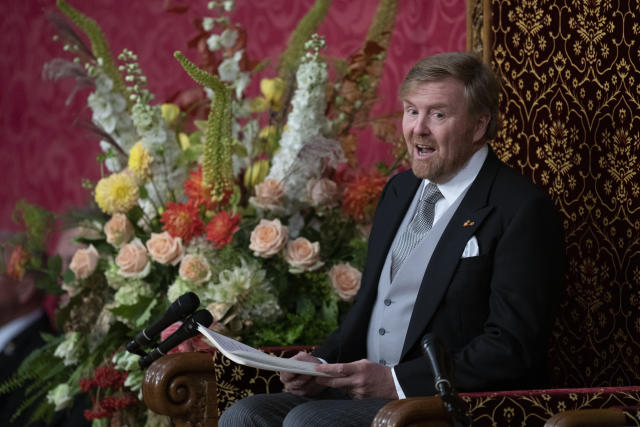 In his annual address to the country on Tuesday, Dutch King Willem-Alexander outlined ideas from the Dutch government to assist households being pushed by rising costs.

The royal family was being booed by the public as they rode in a horse-drawn carriage from their palace in The Hague to the National Theater. They had just returned from the official funeral of Queen Elizabeth II in London.

In his yearly speech, delivered on the third Tuesday in September each year, the monarch listed a number of the “uncertainties” the nation is now dealing with, including inflation, energy costs, and the conflict in Ukraine. The budget for the coming year is unveiled shortly after the address.

Speaking to a joint session of both chambers of parliament, the king stated that “people are feeling more uncertain about both the near- and long-term future.” He promised to provide low- and middle-income households with an aid package worth 18 billion euros ($17.9 billion).

Based on average use starting in January 2022, the bill establishes a price cap for gas and electricity. The cap is expected to save households an average of 190 euros ($189) each month, according to the government.

The king alluded to the proposal in his address, but the budget noticeably omitted the energy price cap that politicians and energy firms agreed upon on Monday. Dutch Prime Minister Mark Rutte was opposed to the concept of a cap as recently as last week, saying any assistance would have to wait until the new year.

The march, which was held for the first time since 2019 after two years of pandemic restrictions, drew almost 10,000 spectators. The Hague’s elementary schools were closed so that kids may take part in the celebrations.

Emma, 3, told The Associated Press as she waited behind barricades along the route, “I just want to watch the horses.”

Princess Amelia accompanied her parents for the first time. She turned 18 this year and is now anticipated to take on several royal responsibilities. Not everyone enjoyed the day. Rutte must leave, said the signs held by the protesters. One man spoke of his difficulties with skyrocketing gas prices and store pricing while carrying an upside-down Dutch flag, a representation of anti-government rallies.

According to the police, they detained five persons and seized six tractors. Over the past year, farmers have been protesting by driving their tractors into The Hague in protest of environmental rules that limit their ability to conduct business. The city made the announcement that, as a security measure, no heavy cars would be permitted on the streets last week. When presenting the formal budget to reporters, Finance Minister Sigrid Kaag said, “It is not a festive time for many Dutch citizens,” echoing the king’s sombre sentiment. A rise in the minimum wage, a decrease in income tax rates, and an expansion of child and health care subsidies are all part of the package.

In the new budget, Ukraine would get 3.9 billion euros in military and humanitarian help. The Dutch dispatched 90 soldiers to Ukraine’s military last month to help with basic training. Additionally, the government has set aside $1 billion to construct accommodation for refugees. Due to a lack of beds, hundreds of asylum seekers have been sleeping in unsanitary conditions outside of an asylum reception centre.

As part of the annual “hoedjesparade,” a custom in which ladies dress in distinctive headwear for the occasion, bold hats could be spotted throughout the city.

Speaker of Tennessee House considers rejecting US aid for education