Penn State finished with a loss and two wins after three games on the road to open the season.

With Indiana and Michigan State on the horizon, the Nittany Lions have a chance to improve upon their two-game win streak and earn important victories in their first pair of home matches of 2021.

Coach Erica Dambach’s team has tapped into a strong vein of form over the course of its last two games with a 4-1 win over Northwestern and 2-0 shutout against Illinois.

Both games provided challenges that brought out unique strategies for the blue and white, each managing to control the game effectively. As the Nittany Lions continue to learn how to react to different opponents’ defensive strategies, they passed both tests against the Wildcats and Fighting Illini.

But on the horizon is arguably Penn State’s toughest test yet.

Indiana, who Penn State plays in its opening home match, is on its own two-game winning streak that includes a victory over Rutgers, who handed the blue and white its only defeat on the year.

Rutgers and Indiana played a 0-0 deadlock until the Hoosiers broke the tie with an overtime winner from senior forward Melanie Forbes.

Penn State will take extra care defending against Forbes, as she has scored all of Indiana’s goals this season with three finishes in her last two games.

The Nittany Lions’ opponent following Indiana is Michigan State, who has formed a 1-1-1 record in its first three games.

The Spartans are struggling on the defensive end to start 2021, as they allow over twice as many shots (44) as they create (21).

Before going to Jeffrey Field, Michigan State will travel to Piscataway, New Jersey, to take on Rutgers Thursday while the blue and white takes on Indiana.

For both squads, the game will be their second fixture in the span of four days. 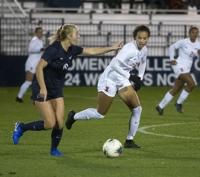 In its first poll of the 2021 spring season, United Soccer Coaches ranked Penn State as the …

Without a proper preseason, Dambach expects that players’ lack of game fitness will be a problem for teams across the Big Ten and that players outside of the starting 11 may find themselves on the pitch more often.

“I would expect this to look a little different than it has in the past,” Dambach said. “These players, as much as they ever have, deserve opportunities. This whole group has been working. We want to provide as many opportunities as we can, even to the young players.

“I would expect the box score to look a little different than it has in the past. I would expect to give more opportunities in these games — we’ll see what happens in the heat of the battle.”

How aggressively the blue and white chooses to address Indiana and Michigan State will drastically change how many substitutions the Nittany Lions need to make and how often the starters need to rest.

If Dambach chooses to play as the team did against Northwestern, players like redshirt sophomore forward Ally Schlegel and graduate forward Kristin Schnurr will spend more time on the bench. But if Penn State opts to play the more aggressive style it demonstrated against Illinois, players like senior midfielder Sam Coffey will need to be substituted off.

As fixtures come in hot and fast, Penn State’s quality off the bench and team fitness may be tested as the season goes on.

The Nittany Lions host Indiana on Thursday at 4:30 p.m. and Michigan State on the following Sunday at 1 p.m.

For MetroWest’s new business owners, the pandemic was the biggest hurdle