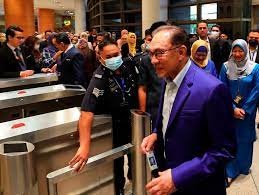 He arrived to the Ministry of Finance (MOF) building compound at 7.58 a.m., dressed in a blue suit, and was greeted by Datuk Johan Mahmood Merican, deputy secretary-general of Treasury (Policy).

Anwar, 75, was then seen entering his level 12 office for a closed-door briefing with MOF officials.

Anwar revealed the Cabinet line-up for the unity administration on December 2, including two Deputy Prime Ministers and 25 Cabinet ministers.