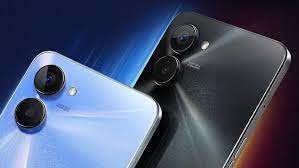 According to sources, the phone with this model number passed TENAA certification last month.
It will have a large 6.5-inch LCD display with Full HD+ resolution. The exact resolution is expected to be 1080 x 2408. It is also expected to run at a respectable 90Hz. As for the internals, I don’t know what processor is used. All we know is that it might be using an octa-core processor. It can be backed up with 6GB/8GB/12GB RAM and 64GB/128GB/256GB onboard storage.

Let’s start with the leaked poster. It shows that this phone will be available in two different colors. Looking at the picture, we can see a black color and an almost pearly bluish-white color. The back panel looks like glass and is completely flat. The two camera lenses protrude from the device with separate bumps. This is similar to the OnePlus Nord N300. Otherwise, you’ll see volume buttons and a SIM tray on one side of the device. Now let’s examine some specifications of this device. According to sources, the model number of this phone is RMX3617.

Based on the specs, the Realme 10s is expected to have a rather large 4880mAh battery, and 33W of power could potentially charge that battery. We don’t know the price of this phone at this time, but we’ll find out when it goes on sale tomorrow.