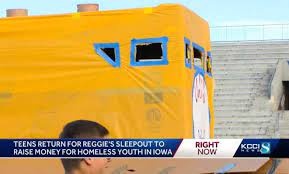 On Saturday, during Reggie’s Sleepout, groups flocked to Drake Stadium to raise awareness and money for children experiencing homelessness in Iowa. Drake Stadium was transformed into an overnight camp site.

Director of IHYC Toby O’Berry stated, “Reggie Kelsey was a young person who aged out of the foster care system. “When he turned 18, there weren’t many systems in place to support him. He sadly passed away as a result of a lack of services and resources.”

The annual Reggie’s Sleepout is put on by the Iowa Homeless Youth Centers (IHYC). The group strives to end youth homelessness throughout the state. Emergency shelters, emergency beds, and long-term housing programmes are just a few of their services.

Teams competed in a box design competition this year. A number of teams got to work constructing various structures out of boxes and tape, including a submarine, a castle, a house, and more.

Teams raise money annually. They attend Reggie’s Sleepout and have a good time while learning about the difficulties young people encounter when they are homeless.

On Saturday, a crew from World Link, an organisation that places exchange students, was there. For the fundraiser, the group of students raised thousands of dollars.

A Ukrainian exchange student named Lucya Shapovalova remarked, “I just wanted to be useful; to be helpful to people to have a better life.”

“Taking good care of other people is not an accomplishment. It’s an obligation, “Albanian exchange student Antonio Rrapi was cited. “I’d say that quote has shaped who I am,” the speaker said.