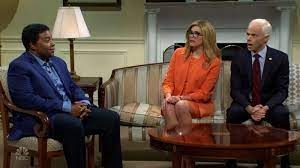 During the most recent episode of “Saturday Night Live,” the race for Georgia’s final US Senate seat was highlighted.

“Herschel, the midterms weren’t the red wave we were expecting for, but we think you can win this Tuesday,” Mikey Day stated in the role of Texas Republican Sen. John Cornyn.

The show began with Republican senators gathering with Kenan Thompson as Herschel Walker to discuss the upcoming election.

“Yes, the key now is to get out the vote because you have this enormous runoff coming up,” Cecily Strong as Tennessee Republican Sen. Marsha Blackburn stated.

The group then discusses how competitive Walker’s contest against Sen. Raphael Warnock is.

“Well, I’m good at those,” Thompson as Walker said. My ex-wives said that all I do is flee.”

“This runoff is critical, Herschel. “Right now, we could really need a win,” Day’s Cornyn stated.

“You can count on me,” Thompson joked to Walker. “I came here to chew ass and kick bubblegum, but I’m out of gugglebum.”

“Perhaps in the final push, let’s keep it low and focus on the message,” Strong’s Blackburn suggested. “Exactly. “Like Kanye,” Thompson’s Walker explained.

“No, no!” Strong’s Blackburn responded. The senators became increasingly concerned about the Republican candidate after he stated he’d check into “vampires, werewolves, and that nasty little Geico gecko,” so they went with plan B, which entailed James Austin Johnson as Senate Minority Leader Mitch McConnell locking Walker in a secure room.

“It’s only for a few days,” Johnson as McConnell joked before the event began.

Sobowale challenges lawmakers on democracy and the rule of law