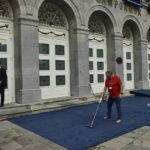 On Friday, the editor-in-chief of one of the most read newspapers in Eastern Europe was a Pole who encouraged supporters of democracy to stop the Russian president from invading Ukraine and cautioned against the growth of “populism, nationalism, and authoritarianism” in the West.

Among the other prize recipients recognised Friday at an occasion attended by Spain’s royal family were a group of Olympic athletes who were refugees, a renowned Mexican archaeologist, and a Japanese architect. The honours are regarded as some of the most distinguished in Spanish-speaking countries.

Adam Michnik, a former human rights advocate who is now the editor of Poland’s liberal Gazeta Wyborcza, made an impassioned speech after being given the Princess of Asturias Award for communication and the humanities this year.

Michnik remarked, “(Vladimir) Putin cannot win this war,” during the royal gala in Oviedo, a city in northern Spain.

“A war against the democratic world as a whole,” he declared, referring to the turmoil in Ukraine.

Michnik was a major member of Poland’s Solidarity pro-democracy movement and a dissident who was jailed in the 1980s for trying to overthrow the oppressive communist regime there. Michnik had developed into “a symbol of freedom of speech,” according to the prize committee.

Other prize winners have equally impressive accomplishments. This year’s award in the social sciences category went to Eduardo Matos Moctezuma, who oversaw the excavation of the Great Aztec Temple in Mexico City, a significant accomplishment in the field of archaeology.

Shigeru Ban, a Japanese architect, won the Concord Prize for his innovative work in creating temporary shelters for those impacted by armed conflict and natural calamities. The British sailor Ellen MacArthur, who held several world records for solo yachting before founding a nonprofit organisation that promotes a sustainable way of life, was given the Asturias medal for international collaboration.

The Olympic Refugee Foundation and the refugee Olympics team won the sports award, according to the prize judges, for embodying the ideals of inclusion, education, unity, and humanity. The technical and scientific research prize was given to four foreign scientists for their groundbreaking achievements in artificial intelligence.

The literature prize went to Juan Mayorga, one of Spain’s most well-known and esteemed playwrights. Flamenco performers Carmen Linares and Mara Pagés, both from southern Spain, received the fine arts prize for their contributions to modernising the Spanish dance style.