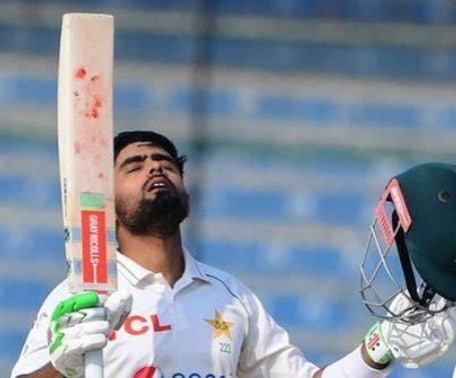 Captain Babar Azam hit an undefeated 161 as Pakistan overcame an unstable start to score 317-5 against New Zealand on the first day of the Opening Test at the National Stadium in Karachi on Monday.

Babar used his luck in a 277-ball inning, including 15 fourth innings and a massive sixth to elevate his century while Agha Salman was undefeated on three stumps after New Zealand did not. Get off to a good start with the ball.

Babar chose to strike first and the touring team began their first test in Pakistan in 20 years with two quick hits through the stump, with Ajaz Patel knocking out Abdullah Shafique by seven and partner Michael Bracewell knocking out Shan. Masood with a score of three.

Bracewell should have got the key hit from Babar in the 15th minute, but Daryl Mitchell missed a small chance on the first miss, although the pitcher responded by letting Imam-ul -Haq caught 24 between the next three balls.

However, Babar continued his saving act after the break, reaching the ninth Test century alongside Sarfaraz Ahmed, who scored 86 in his first Test since 2019 after his substitution wicketkeeper Mohammad Rizwan was at the side.

Pakistan recovered from early blows as Babar turned half a century old but New Zealand captain Tim Southee knocked them down 110-4 as Saud Shakeel (22) hit a match against Henry Nicholls at the ravine. quick break.

Babar had a great 196-point partnership with Sarfaraz before Patel sacked the former captain when he beat Mitchell on the first slide just before the finish.

New Zealand, who abandoned their white-ball tour of Pakistan last year over security concerns, are looking to end a four-game losing streak with Southee as their new captain after a six year term of Kane Williamson.

Pakistan is looking to weather a similar crisis, including a 0-3 home loss to England, in a series of two Tests against the New Zealanders.