MySQL ORDER BY in Analytical Functions: The Easy Guide for Starters 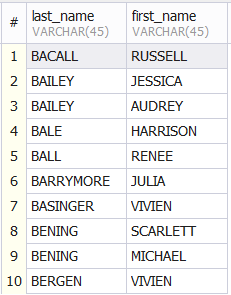 MySQL ORDER BY is easy. But how about using it for analytical functions?

Oracle calls it that way. But MySQL and others call them window functions. The purpose is to run various calculations over data groups in a single pass. And the results of these are helpful for data analysis. So, window functions are analytical functions.

Still, MySQL ORDER BY for window functions is for sorting sets of rows.

What is MySQL ORDER BY?

Sorting data is one of the strengths of SQL, including MySQL. And you can use ORDER BY to do that. So, instead of having names like this:

The names above are sorted by last name and first name. Notice the names with the same last name, and you will see the difference in the 2 images.

But that sorts the result set as a whole. Using MySQL ORDER BY in analytical functions sorts by partition, set, or group. Like the ORDER BY for the entire result set, it arranges text alphabetically (or the reverse). Or it arranges numbers in increasing (or decreasing) order. Or dates in chronological order.

Here’s a sample output using the ROW_NUMBER window function with ORDER BY:

You will learn more about this and how to partition your results in the following sections.

You are probably familiar with this syntax:

It sorts the entire result set using column names or other expressions. Expressions can be a column name used in a function like YEAR(date_column) or UPPER(text_column). ASC and DESC are used to flip the result 180 degrees. It tells you if the order is ascending or descending.

But you can use MySQL ORDER BY in window functions within an OVER clause. But first, let me show you where an OVER clause is used:

Where <window_function([expression])> is the window function, like ROW_NUMBER, DENSE_RANK, or others. For a list of MySQL window functions, visit the official documentation.

Meanwhile, <over_clause> is defined as:

So, there’s your ORDER BY clause inside the OVER clause.

Let’s discuss each part of the <over_clause>:

Meanwhile, WINDOW <window_name> AS (<over_clause>) is where you define the OVER clause for a window name.

Again, the LIMIT and OFFSET clauses will affect what rows are retrieved based on sort order.

To see where all these fit in a SELECT statement, see the 2 images below.

The above images show the different clauses used with window functions. Let’s examine examples more profound in the next section.

The 5 examples here will use the following tables and data:

We will also use the Payment table in the Sakila sample database.

And to be clear, the MySQL version I used is 8.0.31, running on Ubuntu 22.04. You can see yours using SELECT VERSION(). And the GUI tool I used is dbForge Studio for MySQL version 9.1.21 Enterprise Edition. It helps me get productive in SQL coding and produce high-performing queries. If you tried the examples here and it’s not the same or has an error, make sure the MySQL version is the same as mine.

Example 1: Add a Row Number in the Result Set

The example below uses the ROW_NUMBER window function without a partition. This means rows are numbered for the whole result set. But an ORDER BY is specified, which will sort the results based on the highest to lowest manga sales.

See the output below:

If you remove the ORDER BY clause, the output is how it is stored in the table. Or based on the sequence done in the INSERT statement earlier.

See the output below:

Rows are numbered per year. It resets to 1 every year from 2020 to 2022. Sorting is also from lowest to highest sales. If you make it descending, the result is the same as the image in the first section (What is MySQL ORDER BY?). The sort order flipped to which row is #1.

In this example, we will rank the results by the year, starting with the highest sales. To see how RANK and DENSE_RANK work with equal figures, we need to round the sales figures. Here it is:

And here’s the result:

From the above, manga sales are ranked yearly based on the highest sales. Note that there are ties in the sales figures. With RANK, the ranking has gaps. So, 4 comes after 2 in the year 2020. But with DENSE_RANK, the ranking has no gaps. So, the outcome is up to the third rank only. It’s different in 2022. There are no ties. So, there are 5 ranks.

Note that the ORDER BY clause is required to produce this output. Try removing it, and all the ranking values become 1. And it will make no sense.

Example 4: Getting the Top Performer and the Runner Up

The example below will get the top-ranking manga series and the runner-up per year based on sales. It will also use a window name to avoid repeating the same OVER clause. And the ORDER BY clause is essential for sorting to get the top performer and the runner-up

And here’s the output:

The window functions are inside a CTE. Why? Because 6 records will appear if you only run this:

And 3 of them will have a NULL runner-up like this:

So, the CTE will give the above result. But the query to the CTE will filter the result and remove the nulls (WHERE runner_up IS NOT NULL).

And because this will throw an error:

This will use the second table and display the running totals of a bank account transaction. The ORDER BY clause is responsible for making the result chronological. Here’s the code:

And here’s the output:

The frame clause ROWS UNBOUNDED PRECEDING made this possible. For more details on frame clauses, check this out.

Example 6: Using ORDER BY with LIMIT

The following example will show the effects of LIMIT when we reverse the sort order with DESC. First, here’s the code with an ascending sort order:

The code above uses the LAG window function. It will give the payment amount of the previous row. Here’s the result:

Notice the chronological order based on the payment date. Note the values.

Then, let’s try changing the sort order to descending:

And here’s the result:

Notice the payment dates? It’s different from the previous result.

The May to July payments do not qualify for the LIMIT 10 rows. That’s why the result was very different. So, you should be careful and control this moment when using ORDER BY with LIMIT.

The MySQL ORDER BY clause in analytical or window functions is for sorting out row groups. You can follow the same concepts from the 6 examples in your reports when applicable.