- Advertisment -
HomeNewsSamsung prepares a folding laptop with an OLED screen that, when closed,...
NewsTechnology News

Samsung prepares a folding laptop with an OLED screen that, when closed, has the largest screen diagonal 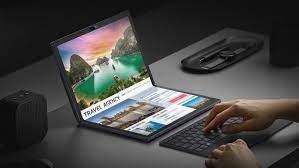 Hidden in an industry report about Samsung’s plans to produce laptops with OLED screens, it said it is also preparing to release one with a 17.3-inch folding screen in 2023. Samsung is said to be will release this year but seems to have postponed the launch for reasons not shared by industry insiders in Korean media reports citing research firm Omdia. HP is another laptop maker that has postponed the launch of a 17-inch device with a foldable LG display to next year, so the delay could be related to the current sluggish demand situation. for laptops because these flexible OLED panels don’t too cheap.

This, and Asus’ growing orders for OLED laptop screens, have raised Samsung’s prediction to 8.5 million such panels by 2023, from around 6 million this year. Additionally, Samsung’s first laptop with a foldable 17.3-inch OLED display will have a larger remaining screen with a diagonal of 13.3 inches when folded, unlike its next device. HP has a 17-inch screen that will fold into a 13.3-inch (11-inch) device.

For example, the recently launched Asus ZenBook 17 Fold (more than US$3,500 at Amazon) comes with a 17-inch folding display powered by BOE, and at this price point, it can be considered a premium device for the niche. This is why Asus only ordered 10,000 panels of this type from BOE, and so did orders from HP to LG. However, if Samsung gets into the foldable laptop display game with its own machine, its starting price could be lower, as it will source panels from its subsidiary. itself, the world’s largest OLED display manufacturer.

The Asus ZenBook 17 Fold offers the second largest diagonal, as it has a 12.6-inch display when closed, while the ThinkPad X1 Fold Gen 2, which is actually the best-selling model of the category, has a 16.3-inch OLED display inches Folds down 12 inches when closed.