The cryptocurrency war between Cameron Winklevoss and Barry Silbert is fierce 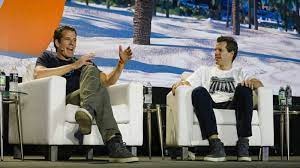 Both Cameron Winklevoss and Barry Silbert were early adopters of bitcoin who made enormous profits from their investments and established significant enterprises in the process. They had a profitable alliance that helped both of their customers succeed for almost two years.

Digital Currency Group (DCG), a cryptocurrency conglomerate that includes the Grayscale Bitcoin Trust and trading platform Genesis, was founded by Silbert. Winklevoss and his brother Tyler are the co-founders of Gemini, a well-known cryptocurrency exchange that, in contrast to many of its competitors, is governed by New York banking regulations.

Currently, the biggest names in bitcoin are engaged in a brutal verbal battle that highlights the depths of the cryptocurrency crisis and highlights the dangers that finally fell on regular investors who became entangled in a wildly unregulated market. Currently, hundreds of millions of dollars in client money are frozen inaccessible limbo as the two cryptocurrency founders argue about who is to blame.

The connection between Winklevoss and Silbert was made possible by a Gemini product called Earn, which has been around for almost two years and promised returns of up to 8% on user deposits. With Earn, Gemini provided Genesis with a loan from a client to distribute among other cryptocurrency trading desks and borrowers.

It was a successful enterprise. Gemini was one of Genesis’ biggest lending partners, delivering the company $900 million worth of consumer cryptocurrency. Genesis had 260 workers and a strong sales desk. According to a person with direct knowledge, Gemini believed Genesis, which is overseen by New York state and the Securities and Exchange Commission, to be the most reputable name in crypto lending.

The capital generated huge profits for Genesis and readily paid Earn users their income as the digital coin markets skyrocketed in 2020 and 2021, which was particularly appealing at a time when the Federal Reserve’s benchmark rate was at almost zero. Yields of up to 20% were being offered by other riskier (and now defunct) cryptocurrency companies including Celsius and Voyager Digital.

The crypto market crashed in 2022, and the Earn model failed.

When FTX went bankrupt in November and users of the cryptocurrency exchange were unable to access billions of dollars in deposits, the floodgates opened even wider. Sam Bankman-Fried, the creator of FTX, was quickly detained on suspicion of fraud, suspected of utilising customer cash for trading, lending, startup investments, and his opulent lifestyle in the Bahamas. As cryptocurrency investors attempted to withdraw their funds, there was a crisis that affected the entire business. Genesis was obliged to halt new loans and redemptions five days after FTX’s demise. “FTX has produced unprecedented market instability, leading to abnormal withdrawal requests that have exceeded our present liquidity,” the business claimed in a tweet.

The spread of the disease was so quick that Gemini and Genesis both sought professionals to help them through a potential Genesis bankruptcy. Since November, all Earn withdrawals have been put on hold. The 340,000 retail customers of Gemini are upset, and some of them have banded together to file class actions against Genesis and Gemini. Winklevoss holds Silbert accountable and has made his fight to recoup the $900 million in deposits made by his clients public.

Winklevoss claimed that such monies belonged to clients that included a teacher, a police officer, and “a single parent who entrusted her son’s college money to you” in a letter to Silbert on January 2. Winklevoss claimed that Gemini had been attempting to communicate with Silbert in a “good faith” way for six weeks but had only encountered “bad faith stall tactics.” Throughout the Thanksgiving break, Gemini attorneys tried to communicate with Genesis’ team, but they discovered that their efforts were effectively rejected, a source claimed.

The advisers for Genesis, DCG, and Gemini’s creditor committee met frequently during the course of the six-week timeframe mentioned by Winklevoss, according to a second source who asked to remain anonymous and spoke to CNBC. Gemini creditors are represented by lawyers from both Kirkland & Ellis and Proskauer Rose, and financial advisors at Houlihan Lokey.

Advisors for DCG and Genesis include the law firm Cleary Gottlieb Steen & Hamilton and investment bank Moelis and Company. The most recent meeting between the three sets of lawyers and bankers was Monday, according to that individual.