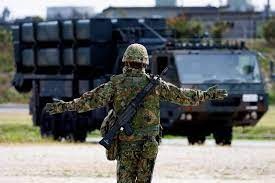 The unions representing public hospital employees held a press conference on December 9 in the capital’s Labor and Welfare Ministry office building to express their opposition to Prime Minister Fumio Kishida’s administration’s plans to use reserve funds from public hospitals to pay for an increase in military spending to 43 trillion yen ($314 billion USD).

This information was disclosed in a study by a government expert group examining Japan’s potential to launch an enemy strike.

Over the course of five years, Kishida intends to expand Japan’s military expenditure to that absurd level. The government proposes to use reserve funds held by national and other public hospitals totaling 150 billion yen ($1 billion+ USD) for the military budget.

Suzuki Hitoshi, secretary general of the Japan National Hospital Workers’ Union (JNHWU/Zen-Iro), stated at the press conference that public hospitals must hold sufficient reserves in case of emergencies given the COVID-19 pandemic. He also emphasised the importance of holding reserve funds for public hospitals to continue operating in local communities.

Kaneko Masahito, secretary general of the union organising employees at Japan Community Healthcare Organization (JCHO) hospitals, stated that the Kishida government’s attempt to use reserve funds from public hospitals for military purposes is wholly unacceptable. He added that these funds should be used to improve healthcare and nursing care services for locals.