The Michigan karaoke industry offers everyone the opportunity to experience singing 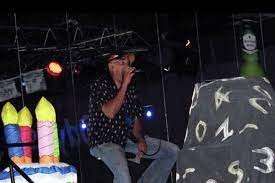 Fans of the Gypsy Nickel Lounge’s karaoke would undoubtedly identify John Kelley, the man seated behind the sophisticated DJ equipment, as a familiar face.

He added, “I suppose I’ve done pretty much any DJ job I can think of.”

Kelley, who was born and raised in Big Rapids and now lives nearby, got his start in music from his band-playing father and began as a DJ before switching to karaoke.

His father owned the sizable sound equipment required for karaoke or DJing.

The company started to take off after a few years, and he adopted the name “Red Hot Karaoke,” which has been in existence for thirty years.

Bring your stuff over, my pals would say whenever they were at a party, he recalled.

“I used to perform six performances a week. I was working every day but Monday, and I even put on a show for youngsters on Sunday afternoon,” he claimed.

Although Kelley’s specialty is usually weddings, he has performed DJ sets and karaoke at a variety of events, including board meetings and birthday parties. Kelley was shocked by the demand for his services given that the COVID-19 outbreak has largely subsided.

“It moved at about 100 mph. For the past two years, everyone has postponed their weddings and other events. Weddings have been happening nonstop, driving us insane. I’ve returned to working four evenings a week, he remarked. Now, Kelley performs on Wednesdays at the Gypsy Nickel, Thursdays at Peyton’s Bar in Idlewild, Fridays at Sportsman’s Bar in Newaygo, and Saturdays at the Gypsy Nickel once again.

One of the best things is when you find someone with a fantastic voice who has never performed in front of an audience yet lacks self-assurance. When they ascend, it is obvious that they are utterly terrified. And when they perform, the audience will cheer them, and the expression on their  face is in shock,” he said. When it comes to karaoke, Kelley asserts that the goal should be enjoyment rather than excellence.

“Even if they can’t sing well, that doesn’t mean they can’t put on an entertaining performance. Some people are aware that they are poor singers. But they’ll make it there and enjoy themselves. Everyone enjoys it because they are having a good time, he added. As it takes courage to sing in front of others, Kelley makes it a point to applaud everyone who does so.

“They got up and performed it, even if they’re not very good. They had the guts to stand up and carry it out. That requires a lot, he added. Some people value karaoke singing more than others might realise.

“For some, it serves as a form of emotional release. Some visitors will sing the same song each week, and you can tell that it makes them happy and helps them come out of their shells when they perform their song, he said. When the audience appreciates their performances, Kelley loves to see the smiles on people’s faces.

At the US national skating competition, Knierim and Frazier win gold in pairs