- Advertisment -
HomeNewsBusinessThere are pockets of hunger in Somalia due to drought and rising...
NewsBusiness 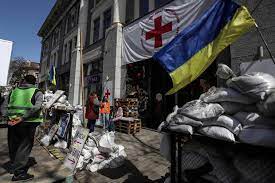 UN agencies said on Tuesday that up to 81,000 people were facing famine in parts of Somalia amid an ongoing drought, dwindling humanitarian funding and the impact of the war between Russia and Ukraine as world food prices soared. Global food prices hit new record highs in March as the war between Russia and Ukraine disrupted markets for staple foods and cooking oils. Due to global crop problems, prices were already at their highest in ten years before the war.

They are facing price spikes and potential shortages after supplies have plummeted since the war began. A famine is declared by UN authorities only if 20% of the population is affected. So far, agencies have identified six different regions in Somalia where the famine affects 5-10% of the population, or 81,000 people. Moreover, 6 million Somalis, or almost 40% of the population, now face extreme food insecurity, they say. This has almost doubled since the beginning of the year.

Meanwhile, the Horn of Africa is facing its driest conditions in more than 40 years after missing a rainy season for three years in a row, and weather patterns suggest it is likely to remain dry this year.  UN agency on food, humanitarian affairs and children says famine could hit Somalia in the next three months if humanitarian funding does not increase, conflict in Ukraine continues to push food prices higher and the rainy season fails again said that there is Countries in the Balkans, Africa and the Middle East rely heavily on wheat and fertilizer from Ukraine and Russia.

Only 4.4% of the UN’s $1.5 billion 2022 Humanitarian Response Plan has been funded so far, agencies warn, putting Somalia in competition with other global emergency hotspots for funding. I’m here. Government agencies say there is a risk of widespread famine unless the funding shortfall is addressed quickly. “In this year of unprecedented humanitarian hardship and hunger, we ask the world not to turn their backs on Somalia. Millions of lives are at risk,” said the World Food Program head in Somalia. said Enkidil Daroom. An estimated 250,000 people died in famine in Somalia in 2011.