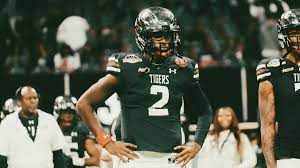 Shedeur Sanders would have been playing football at a different Mississippi school if Brett Favre had his way.

Recently, a collection of texts between Phil Bryant and former Mississippi governor Brett Favre were made public.

Sanders, the quarterback at Jackson State at the moment and the son of Deion Sanders, was a target for Southern Miss in 2019. The former NFL MVP is a Southern Miss alum who wanted to aid his alma mater in luring the four-star 2020 class recruit. He participated in a benefit fraud scheme that cost the state of Mississippi $77 million.

Brett Favre texted Bryant in 2019 saying, “I picked up Deion Sanders and his son who is going to be a junior in high school and plays QB,” according to Front Office Sports. “He’s already had at least 30 proposals, including ours. Since 1991, Deion and I have developed a close friendship and mutual respect.

Brett Favre Shedeur Sanders
“As I had anticipated, Deion’s kid asked where the indoor facility was, and I replied that there wasn’t one yet but that we hoped to start construction in less than two years. I understand that we must first finish the volleyball centre, but I have a question.

Both Brett Favre and Deion Sanders began their NFL careers with the Atlanta Falcons.

In addition to the $5 million he obtained for a volleyball facility, Favre reportedly lobbied then-governor Phil Bryant for $1.5 million to assist pay for an outdoor football complex.

Sheduer Sanders did, in fact, play his college ball in Mississippi in the end. However, he is doing so at Jackson State under the guidance of his father, and as of Saturday’s victory over Mississippi Valley State, he is 15-2 as a starter.

Deion Sanders and Shedeur Sanders are not said to have any awareness of Favre’s plan.