- Advertisment -
HomeNewsUnidentified people have a complaint against them for an illegal meeting outside...
NewsPolitics News 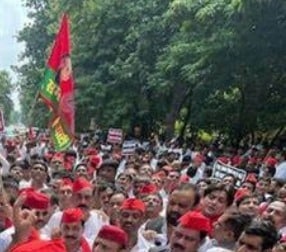 Following a protest by Samajwadi Party members outside the Uttar Pradesh Police headquarters here regarding the arrest of a party leader, police have filed a case against unidentified individuals for allegedly engaging in an unlawful assembly.

A case has been filed against unnamed individuals under sections 188 of the Indian Penal Code (disobedience to order duly promulgated by public servant) and 144 of the Criminal Procedure Code (prohibiting unlawful assembly), according to Shailendra Giri, house officer of the Sushant Golf City police station.

He added that the case had been filed late Sunday night.

Akhilesh Yadav, the leader of the party, and his supporters protested at the state police headquarters and demanded the release of Agarwal, a member of the SP’s social media cell, shortly after his arrest.

Before the budget session, PM Modi asserts that the entire world is focused on India’s budget